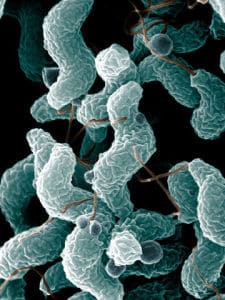 In the UK, more than 70% of supermarket fresh chickens are contaminated with Campylobactor. A Food Standards Agency (FSA) investigation found worryingly high levels of contamination with the campylobacter bug, which can cause food poisoning, on chickens being sold across the country.

Campylobacter is a type of bacteria thought to be the leading cause of food poisoning in the UK. Eating food contaminated with campylobacter can trigger symptoms such as nausea, vomiting, diarrhoea and stomach cramps.

The FSA released the latest figures from its testing of raw chickens in the first half of 2014. The agency has a key role in preventing foodborne illnesses. Reducing campylobacter in chickens is one of its main priorities because more than 280,000 people are infected with it each year in the UK.

The European Food Standard Authority (EFSA) has reported that up to 80% of campylobacter cases are due to raw poultry. It has estimated that the number of cases could be cut by between 50% and 90% if the levels of campylobacter in poultry across Europe was reduced to a tenth of the current levels.

There are health risks associated with chicken containing campylobacter. Eating food contaminated with this bacteria – such as raw and undercooked poultry, undercooked chicken liver pate and unpasteurised milk – can cause food poisoning. The symptoms usually start within two to five days, but can take up to 10 days to begin.

Campylobacter can be fatal for very young children, the elderly and people whose immune system is not working well. It is the most common cause of diarrhoea in the world. Other symptoms can include abdominal pain, fever, headache, nausea and vomiting. It is usually a mild infection, lasting from three to six days.

Cooking chicken will kill off campylobacter. The concern is that someone may handle raw contaminated chicken and then touch their mouth, which could lead to infection. Also, incorrect storage of chicken (see below) could lead to the cross-contamination of other foods. 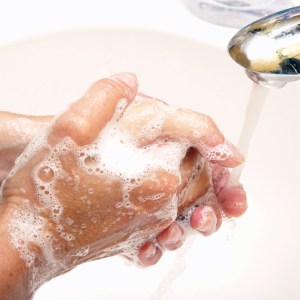 How to protect against food poisoning? 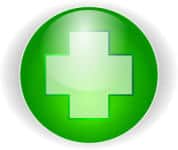 Seeking medical advice for treating campylobacter-related food poisoning is usually not necessary, as it should clear up by itself, but it is essential to drink lots of water to replace the extra fluid lost by the diarrhoea, to prevent dehydration. Some more severe cases may require giving salts and other substances to maintain the balance of these in the body, and the use of antibiotics.

Most cases of food poisoning do not require medical treatment. However, you should seek medical advice if vomiting lasts more than two days, you are unable to keep liquids down for more than a day, diarrhoea that lasts for more than three days, blood in your vomit or stools or signs of severe dehydration, such as a dry mouth, sunken eyes and an inability to pass urine, or passing small amounts of dark, strong-smelling urine.

For more information of food safety training courses and qualifications, audits and inspections, get in touch on 0161 298 1040, contact me or leave a comment below.