You are here: Home / Health and safety / The State of the Nation’s Health and Safety

The state of the nation’s health and safety still shows some woeful figures. It shows that there is still lots to do to reduce the risk of injury, ill-health and even deaths at work. Get in touch if you are at risk of becoming a statistic. Training costs outweigh the cost to put things right after the event.

You may think that you work in a place that could never harm you, but all workplaces have the potential to cause harm and injury to people. Since the Health and Safety at Work Act was created in 1974, fatalities at work have fallen from 651 to 133. Whilst the 133 deaths shouldn’t have happened, it’s a vast improvement. 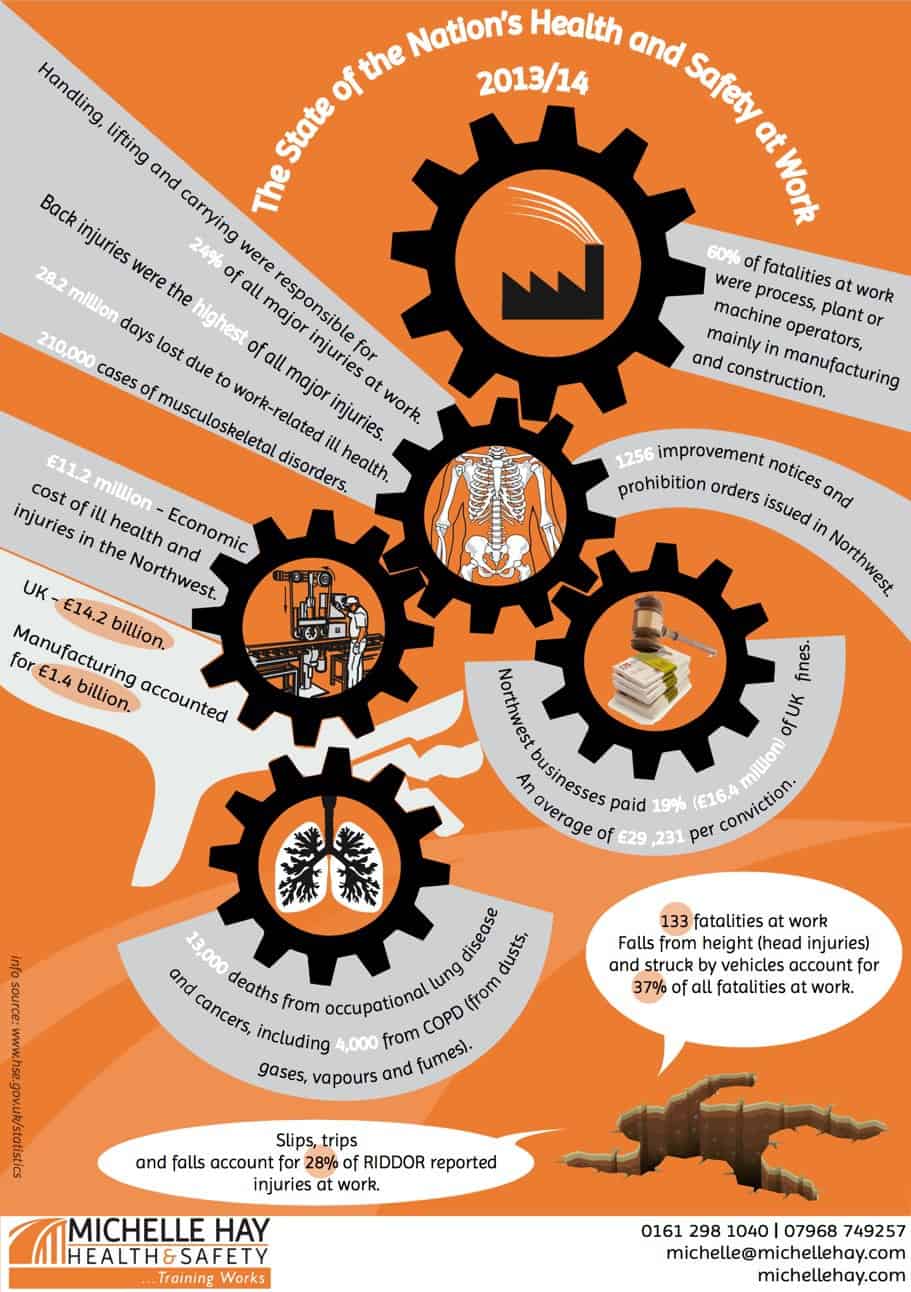 Owners and managers often see training as a burden on time and an unnecessary cost that the business can ill afford, and therein lies the problem. Not training staff to work safely costs much more than the time and money allocated to training.

The true cost of health and safety is published every year by the Office of National Statistics on behalf of the HSE and the figures are staggering. For example, the cost of ill-health and injuries at work in the Northwest was £11.2 million and Northwest businesses paid 19% of the UK fines – an average fine of £29,231 per conviction. Back injuries (the hardest to diagnose) were the highest of all major injuries, so it makes sense that everyone should have suitable manual handling training.

Insurance premiums do not cover the cost of fines and prosecution and a host of other costs when you have a worker off through a work related injury or ill-health. Here’s a well used example that demonstrates the true cost of an accident in the workplace.

‘A worker was using an unguarded drilling machine in a small engineering company employing 15 workers. The sleeve of his jumper caught on the rotating drill, entangling his arm. Both bones in his lower arm were broken and he suffered extensive tissue and muscle injury. Along with the costs below, two employees not involved in the accident were made redundant to prevent the company from going out of business. The managing director was prosecuted following the incident and the total costs to the business were around £45,000‘. Including:

As I talk to businesses about their health and safety needs, some rarely consider the consequences of poor health and safety practices and just focus on productivity and output. Yet it is exactly those two things that are immediately affected by an accident or injury of an employee. The exception are those that have had a reportable accident and have had to deal with the long and costly process that follows.

Michelle Hay has over 25 successful years in managing and training staff and working with directors, CEO’s and MD’s, in a number of industry sectors. Fun, inclusive, friendly and interactive training that works every day from a qualified and experienced trainer.

Book a course now and make a start on creating a positive culture towards health and safety in your workplace. Take responsibility, or risk the fines and prosecution, can you really afford to miss this?